Alaska is the largest U.S. state by area and the most sparsely populated. The estimated population is approximately 740,000 people, with half of Alaska’s residents residing within the Anchorage metropolitan area. At 663,268 square miles, Alaska is by far the largest state in the United States, and more than twice the size of Texas. As an independent nation Alaska would be the 19th largest country in the world. More than half the state is federally owned public land, including a multitude of national forests, parks, and wildlife refuges.

Indigenous people occupied Alaska for thousands of years before the arrival of Europeans. The Russians were the first Europeans to settle the area beginning in the 18th century. For the czars of Imperial Russia the expense and difficulty of maintaining this distant possession prompted its sale to the U.S. in 1867 for US$7.2 million, or approximately two cents per acre. Alaska became the 49th state of the U.S. on January 3, 1959.

While it has one of the USA’s smallest state economies in the country, Alaska’s per capita income is among the nation’s highest, owing to a diversified economy dominated by the abundant natural resources of fishing, natural gas and oil. Tourism and bases for the United States armed forces also play a significant role in the Alaskan economy.

Indigenous peoples make up over 15% of Alaska’s population, the highest of any U.S. state. Over two dozen native languages are spoken. Native Alaskans exercise considerable influence in local and state politics. 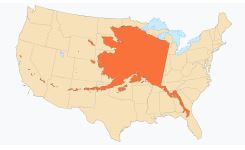 The state is bordered by Canada’s Yukon and British Columbia and maritime bodies the Gulf of Alaska, Pacific Ocean, Bering Sea, Bering Strait, Chukchi Sea to the west and the Arctic Ocean to the north. Alaska’s waters touch Russia’s territorial waters in the Bering Strait.

The climate in Southeast Alaska is classified Mid-Latitude Oceanic. Alaska’s Southeast is both the wettest and warmest part of the state with milder temperatures in the winter and high precipitation throughout the year. Juneau averages over 50 inches (130 cm) of precipitation a year, and Ketchikan averages over 150 in (380 cm).The Southeast is the only region in Alaska in which the average daytime high temperature is above freezing during the winter months.

Alaska has an abundance of seafood, with the primary fisheries in the Bering Sea and the North Pacific. Seafood is one of the few food items in Alaska that is generally cheaper within the state than outside it. Many Alaskans take advantage of salmon seasons to harvest portions of their household diet while fishing for subsistence, as well as sport.

Hunting for subsistence is still common here, with a focus on caribou, moose, and Dall sheep. An example of a traditional native food is Akutaq, the Eskimo ice cream, which can consist of reindeer fat, seal oil, dried fish meat, flavored with local berries.